Since 2000, the U.S. has experienced a decline in the number of publicly traded companies, a trend that comes with significant economic risks and implications. Proponents of deregulation cite increased disclosure and regulatory burdens placed on public companies as the cause. Is that indeed the case? Award-winning research examines the issue.
Share

Since 2000, the United States has been experiencing a decline in the number of companies that are publicly traded, a trend that comes with significant economic risks and implications. As public companies have access to massive amounts of capital, they are major drivers of employment and economic growth and are key to the proper functioning of capital markets. Proponents of deregulation, especially practitioners, cite the increased disclosure and regulatory burdens placed on public companies as the cause of this decline. To encourage companies to go public through initial public offerings (IPOs), legislation such as the 2012 Jumpstart Our Business Startups (JOBS) Act has deregulated public companies with the aim of reducing costs of going public. This deregulation carved out exemptions and reductions in financial reporting for newly public firms, such as the Emerging Growth Company benefits.

Darden Professor Ting Xu, an expert in corporate governance and entrepreneurial finance, set out to explore the question “Did heightened regulations decrease the number of public companies?” in his paper “Regulatory Costs of Being Public: Evidence From Bunching Estimation.” Along with Michael Ewens of the California Institute of Technology and Kairong Xiao of Columbia Business School, Professor Xu estimates the regulatory compliance costs faced by public companies and conducts a quantitative analysis to test whether these costs are influencing IPO and delisting (going private) decisions. The researchers used data from Securities and Exchange Commission (SEC), Audit Analytics, VentureSource data.

To estimate regulatory costs, Xu and his collaborators exploit a regulatory quirk in the U.S.: Many regulations are exempted for firms below certain public float thresholds.1  This gives firms incentives to keep their floats below these thresholds, thus evading regulations and reducing compliance costs. Consistent with this, Xu and his collaborators find significant bunching of firms’ public float below these thresholds (see Figure 1 below) when the regulations were in place. In contrast, such bunching pattern did not exist before these regulations were introduced. The researchers further document that firms manipulate their public floats mainly by substituting debt for equity, without cutting investments.

Using a state-of-the-art empirical methodology called the bunching estimator, the authors infer the dollar costs of these regulations from firms’ bunching behavior. The idea is that greater bunching by firms implies greater regulatory costs. The authors then take these cost estimates to study the impact of regulatory costs on firms’ public-versus-private choice. 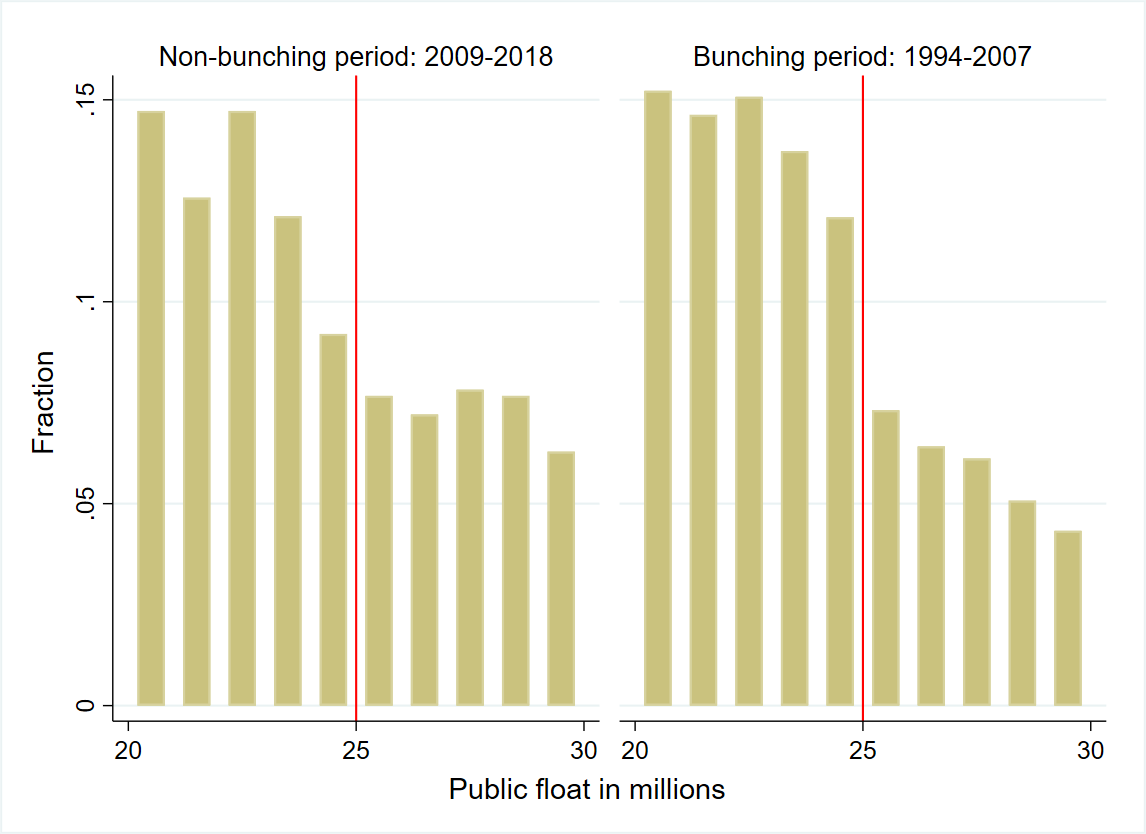 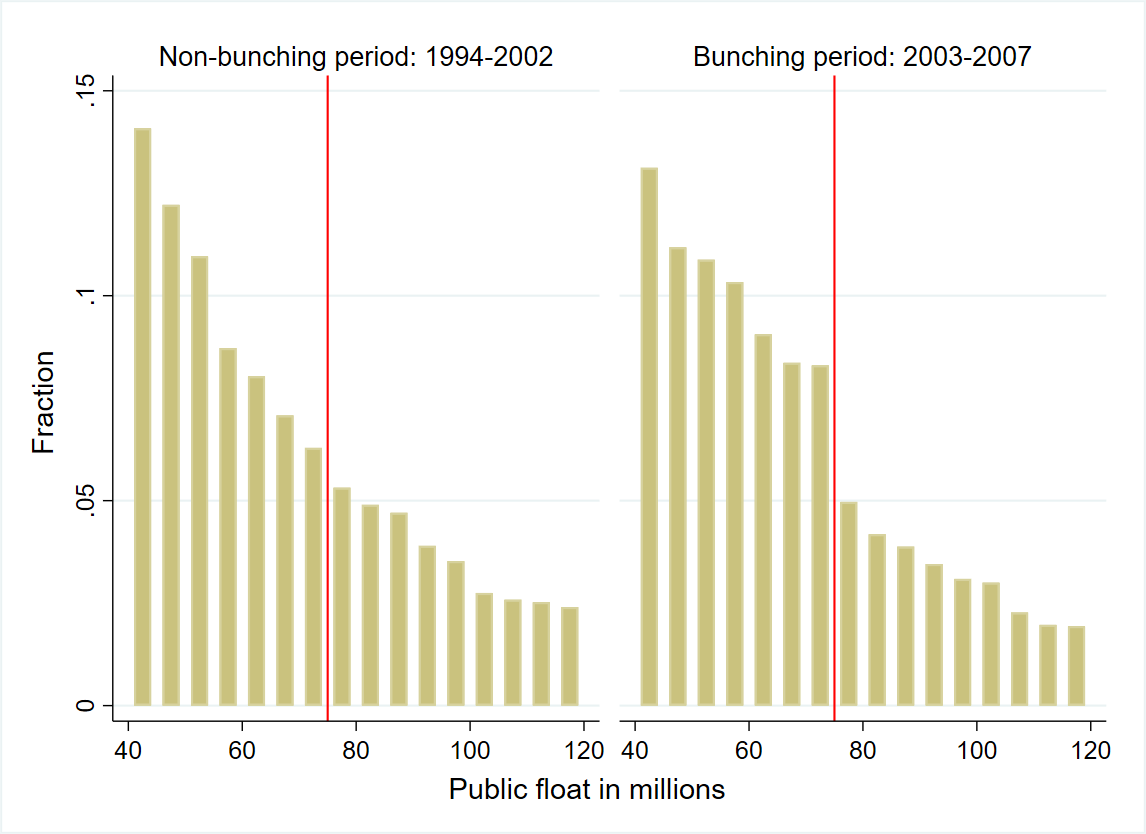 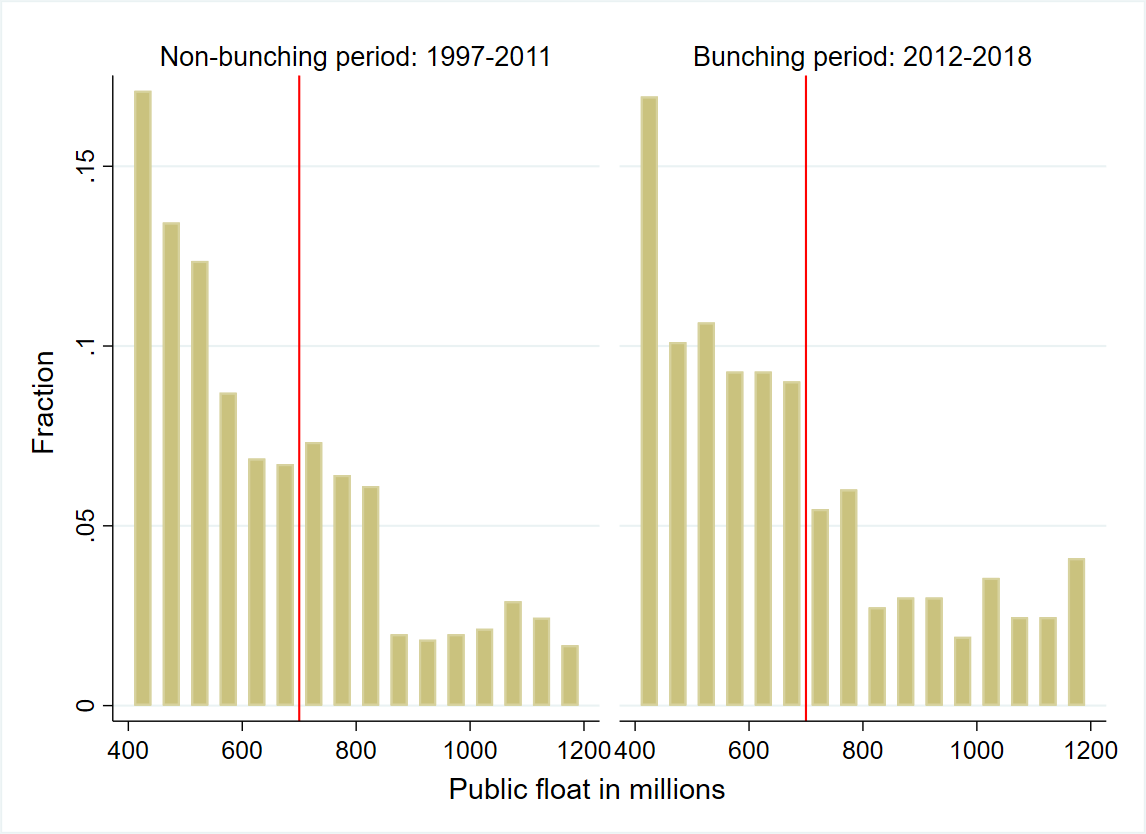 First, regulatory costs can be safely categorized as economically significant, as they represent 4.1 percent of the median firm’s equity value. Given that public companies are usually valued at over a billion dollars, these regulatory costs add up. Xu also notes that “smaller firms bear disproportionate amounts of regulatory costs relative to their size because a large portion of these costs are fixed.”

Second, regulatory costs are more likely to affect private firms’ decisions to go public than public firms’ decisions to go private. This is partly due to the fact that many investments into regulatory compliance are irreversible and are thus sunk costs when public firms consider whether to go private, whereas all these costs are relevant when private firms consider going public.

Third, and most importantly, regulatory costs only account “for a small fraction of the aggregate decline in IPOs.” For example, in contrast to the popular view that the Sarbanes-Oxley (SOX) Act is the main culprit of declining IPOs, the authors show that removing SOX Act would not have significantly increased IPO volume. Overall, variation in regulatory costs only explains 7.4 percent of the aggregate decline in IPO volumes post-2000.

Deregulation for reasons other than increasing IPOs might be desirable, but it is unlikely to reverse the aggregate trend of decline in public companies. Other non-regulatory factors, such as abundant private equity, increasing importance of economy of scale and investment in intangible assets likely played more important roles in explaining the decline. To revive the public equity market, policymakers would be well-advised to focus their attention on those factors, rather than public firm regulations.

Ting Xu co-authored “Regulatory Costs of Being Public: Evidence From Bunching Estimation” with Michael Ewens of the California Institute of Technology and Kairong Xiao of Columbia Business School. The paper won the 2021 China International Conference in Finance Best Paper Award.

This article was developed with the support of two of Darden’s research centers: The Richard A. Mayo Center for Asset Management and the Institute for Business in Society, at which Raphael Guimaraes is a research assistant.

Xu is an expert in entrepreneurial finance, fintech, and family firms, with special research interests in crowdfunding, barriers to entrepreneurship, and the governance of family firms. Not only has his work been published in leading academic journals, it has also been featured in news outlets including Bloomberg and Politico.

Before coming to Darden, Xu taught corporate finance at the University of British Columbia. He holds a Ph.D. and bachelor’s degree in finance and a master’s in economics.

Richard A. Mayo Center for Asset Management Institute for Business in Society