It is a financial truth universally acknowledged that a diversified portfolio reduces risk. Investing all of your wealth in one business exposes you to all of the risk of that business, while investing in a diverse pool of businesses allows that if one business has a lousy day, another is likely to offset that with a good day. This tenet also applies to countries in that there are strong incentives for investors to spread their wealth across every country in the world in order to minimize portfolio risk.

So goes the theory. But in today’s markets things get a little more complicated. And that’s because globally, there are numerous barriers that make it difficult for an investor in one country to buy and sell securities in many foreign markets. The trend toward cross-border barriers that create market segmentation has, in recent years, been only on the rise.

Understanding the cost of market segmentation in global financial markets is the focus of new research by Darden’s Michael Schill.

The Restrictions of Segmented Markets

Together with David Chambers of the University of Cambridge and Sergei Sarkissian of McGill University, Schill has shed novel new light on the impact of walls between markets.

Those walls may come in the form of higher information costs that come with geographic, economic and cultural differences. Or they may be the products of regulation and institutional restrictions, as some countries restrict cross-border investment flow or enforce differences in standards; the Sarbanes-Oxley requirements of 2002, for example, that make it more expensive than it had been previously for foreign-based companies to list in U.S. exchanges.

“If you’re a business in the U.S. today and you want to raise money for investment opportunities, your potential investors are limited because of intermarket restrictions that discourage some of the world’s investors from investing,” says Schill. “When your investment pool is smaller, your access to capital is more expensive. Companies that face costly capital will naturally restrict growth.”

Looking to the Past to Inform the Future

Quantitatively assessing the cost of market segmentation has proven problematic in past studies. So Schill and his colleagues took a creative approach: leveraging historical data from the U.S. railroad industry in the 18th and 19th centuries. This was a period of important reductions in cross-country investment barriers, with the advent of the cross-oceanic telegraphic line and massive company investment with the build-out of the U.S. railroad infrastructure.

The researchers analyzed price and investment data from between 1873 and 1913 for U.S. railroads that raised money to fund railroad expansion either domestically in New York or internationally in London. To measure the cost of capital, they looked at the prices of U.S. railroad bonds that were listed in New York and London, opening up the chance for British investors to diversify by investing in the rapid rail expansion happening across the United States.

The railroads presented a rare opportunity for a “clean” study of market integration, offering precise detail on the price of bonds in the two stock exchanges over time, as well as the exact geographic location of the railroad investments themselves.

“Looking at the data, what we find is the British investors in the 1870s were willing to pay 12 percent more than their U.S. counterparts in order to get access to U.S. railroad bonds that allowed them to diversify their risk,” Schill says. “And for the U.S. railroad managers, that meant getting capital cheaper, which in turn encouraged them to invest more in infrastructure and expansion. By the turn of the century, the price difference between the two countries was reduced to nothing, as the barriers between U.S. and British markets fell and the markets became integrated.”

The findings can be applied to a contemporary context, as they give insight into what U.S. investors today might be prepared to pay in order to gain access to, for instance, exposure to China, which is currently restricted.

“Our experiment shows us that investors are willing to pay a premium for the opportunity to diversify their portfolios,” Schill summarizes. “We can extrapolate as to what today’s investors might well be willing to pay to invest in foreign markets.”

What’s clear, he says, is that investors are willing to do “heroic things” to gain access to relatively small improvements in risk reduction and return. Diversifying is of paramount importance in the mind of the investor.

At a time when markets are increasingly isolated globally and walls go up that limit opportunities to invest abroad, Schill argues that the incentive for markets to come together is “incredibly strong.”

“Right now we’re going through a period of strong segmentation, with entities building up walls between markets,” Schill says. “But by looking at what was going on over a hundred years ago, we see the clear benefits of integration from this first era of globalization — from the diversification of risk to British investors to the benefits to the U.S. in accelerating a great feat of engineering.

“The build-out of the railroad infrastructure wouldn’t have happened if the U.S. had been doing it on its own. There’s no question about the benefits to the world in sharing risk to drive remarkable and necessary innovation.”

Michael Schill co-authored “Market and Regional Segmentation and Risk Premia in the First Era of Financial Globalization,” which appeared in The Review of Financial Studies, with David Chambers of Cambridge University and Sergei Sarkissian of McGill University. 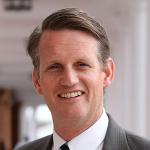 Schill is co-author of the book Case Studies in Finance: Managing for Corporate Value Creation with Darden Dean Emeritus Robert F. Bruner and Darden Professor Ken Eades. Recent research articles include “The Post-Acquisition Returns of Stock Deals: Evidence of the Pervasive Nature of the Asset Growth Effect,” published in the Journal of Financial and Quantitative Analysis and “The Nature of the Foreign Listing Premium: A Cross-Country Examination,” published in The Journal of Banking and Finance.

Get on Track: The Value of Global Market Diversification

Underfunded Pensions: 5 Big Questions Revealing Why Everyone Should Care ">

Underfunded Pensions: 5 Big Questions Revealing Why Everyone Should Care

Coronavirus and the Economy: 5 Big Questions on the Stunning Collapse and Enormous Response ">

Coronavirus and the Economy: 5 Big Questions on the Stunning Collapse and Enormous Response

Q&A: When It Comes to Your Mutual Funds, Managers’ Political Beliefs Matter ">

Q&A: When It Comes to Your Mutual Funds, Managers’ Political Beliefs Matter