Conflicts among co-workers are ubiquitous in business. Sometimes they generate positive momentum, but they can often disrupt and stand in the way of workplace efficiency.
Share

Conflicts among co-workers are ubiquitous in business. Sometimes they generate positive momentum, but they can often disrupt and stand in the way of workplace efficiency.

In an effort to find solutions, researchers have primarily examined the content of conflict. They’ve studied what we’re fighting about.

While this approach has done a great deal to help us understand how conflict influences cooperation and results, it doesn’t help us to consistently identify positive impacts of conflict or explain the role emotions play in how conflicts unfold.

Our work puts forth a new theory for understanding the impact of conflict by focusing on how conflict is expressed.

To us, managing conflict isn’t just concerned with what we fight about. It’s also about how we fight — and more specifically, how we speak and confront one another during disagreements.

My colleagues and I present evidence from field surveys that demonstrate how understanding conflict expression is better than examining the content of conflict when seeking to manage and resolve workplace battles.

Expression contains information about the problem (the what), but how the opposition is expressed (i.e., what we say and do) speaks volumes about a person’s intentions and openness to problem solving.

Take this example, which illustrates how two individuals approach understanding other people’s viewpoints. 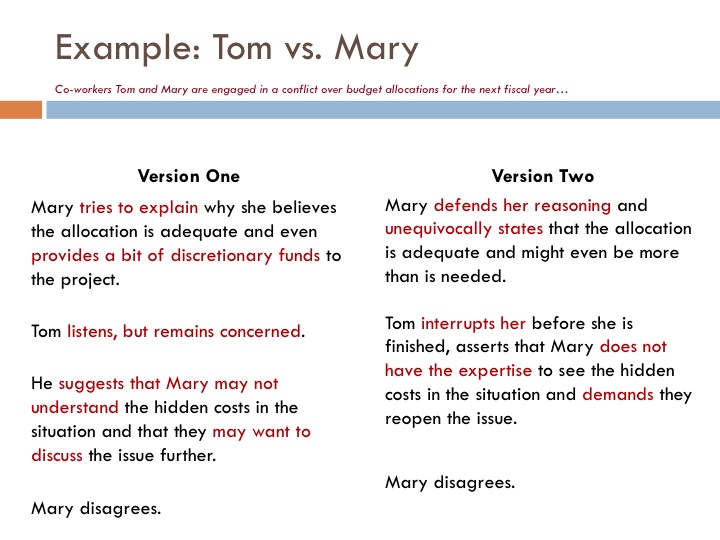 The above example demonstrates two ways in which individuals express the same conflict. The highlighted words exemplify how the processes of discussing the problem differ. In version one, there is still give and take in the conflict, but in version two, there is more defensive posturing and potentially disrespectful behavior. You can imagine that the two conversations would produce different results for Tom and Mary, and how they are able to reach (or not reach) an agreement about the budget allocation.

In our research, we organize these differences in how conflicts are expressed in two ways: directness and oppositional intensity.

Directness refers to the way in which a person explicitly or implicitly conveys his or her opposition. The more directly conflict is expressed, the more explicit the opposition, leaving little room for doubt about the presence of conflict and interpretation of what the conflict is about. In versions one and two of the example, directness of oppositional expression is high. In both versions, it is clear that Tom disagrees with Mary. Their differences are articulated, explained, and are the focus of the exchange. In less direct expressions, behaviors tend to hint at the problem rather than explicitly state and confront the problem. For example, when an individual agrees to a solution but then blocks or stalls downstream decisions, or uses heavy sarcasm, they disguise the explicit message being conveyed. The two versions of the example above differ in the intensity of Tom and Mary’s opposition. 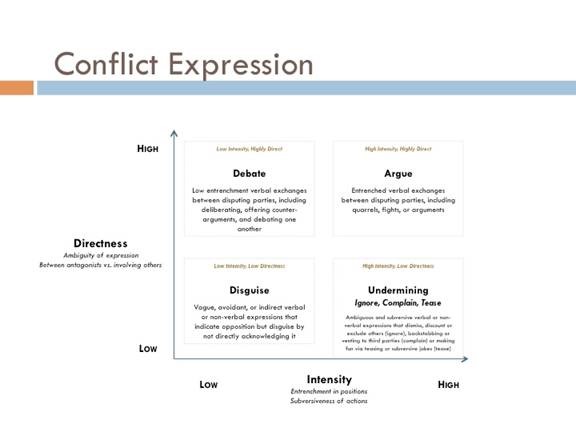 How conflict is expressed will change the nature of the conflict process that unfolds.

Conflict spirals ensue when the receiver of an opposition expression responds in a way consistent with how the conflict was initiated. Spirals can be negative or positive.

Different types of work groups and circumstances specifically yield a certain type of conflict spiral and spiral types can result in high or low performance.

What the Findings Mean for You

Our research uncovered that people perceive expressed conflict the same way when the intensity of the expression is high, not low. The findings also show that long-term teams tend to experience a wider range of conflict expressions: Over time there are more ways to be indirect and passive aggressive. In contrast, short-term teams reported more direct conflicts, ranging in intensity. In U.S. samples, the low directness/low intensity conflicts are as detrimental to outcomes as high intensity fights are.

So whether you work one-on-one with colleagues or within teams, it’s better to be clear and explicit about how you feel, while being open to other possibilities. Clearly, avoiding or disguising a confrontation is detrimental. Our research shows that it is preferable to show strong emotions and express your true and honest feelings as long as the expression is not perceived as an unwillingness to compromise or as threatening, and information is being exchanged about the problem. This behavior results in a de-escalatory spiral that can lead to reflection, clarity, understanding and resolution.

Why Can't We Be Friends? Saving Workplace Relationships