What a difference a quarter makes! After the U.S. stock market plummeted late last year, falling at one point by 20 percent from its highs, it has risen steadily the first two months of this year (see figure 1). Indeed, the broad market measured by the S&P 500 index has now recouped most of its previous decline and is within 5 percent of its high in late September. The principal reasons are investors are less worried about the Federal Reserve tightening monetary policy, and they are hopeful President Trump will not escalate the trade conflict with China. Previously, investors worried that both factors could have exacerbated a slowdown in China and Europe that would eventually spill over to the U.S.

Bond investors, however, are more cautious about the economic outlook than equity investors. Treasury bond yields, for example, currently are fluctuating close to the lows reached at the end of last year, even though inflation and inflation expectations are unchanged. Consequently, real yields have declined. This suggests that bondholders are still worried about the risk of a global slowdown.

Taken together, the two perspectives raise the question: Which set of growth expectations will prove correct?

Those who are encouraged about the outlook for the U.S. stock market believe the prior pessimism stemmed from worries that the Fed would tighten policy too much and thereby weaken the U.S. economy. That risk, however, has all but disappeared.  The Fed did an about-face in January: Officials announced a pause in raising interest rates, and they have also indicated the Fed will end the runoff in assets from its balance sheet later this year. Fed Chair Jerome Powell has also indicated officials will be “patient” in raising interest rates even if unemployment remains unusually low, in part due to the slowdown outside the U.S.

Adding to this optimistic perspective, equity investors have been encouraged by President Trump’s pronouncements that “substantial progress” has been made in trade negotiations with China.

Press reports that the U.S. and China were nearing a trade deal sent the Shanghai Stock Index, which has risen 20 percent this year, to its highest level since last June. Details of an agreement have yet to be announced. However, they are expected to include a pledge by China to increase imports (especially for soybeans and liquefied natural gas) and measures to provide greater protection of intellectual property rights and market access for U.S. companies. China would also eliminate duties on imports from the U.S. that were imposed last year. In return, the U.S. reportedly will drop tariffs on at least $200 billion worth of Chinese imports subject to American levies.1

There is no clarity, however, about mechanisms that will be put in place to enforce compliance with the agreement. Also, little has been reported on how the agreement will address the issue of the Chinese government’s subsidization of state-owned-enterprises (SOEs), given the concerns of the Office of the United States Trade Representative that SOEs may impede fair competition with U.S. businesses and distort global markets.2 Consequently, many observers believe the meeting will produce a truce on the trade issue, but not a final solution.  Nonetheless, equity investors are relieved that both sides do not wish to escalate the conflict.

On the Other Hand: Risk of a Global Slowdown Persists

While the above are positive developments, bondholders are not convinced the risk of a worldwide slowdown has been alleviated.  One reason is the plunge in world equity markets in the fourth quarter coincided with a significant weakening in the Chinese economy and economies that have strong trade ties with China, including those in the European Union. It also coincided with the first significant decline in the volume of world trade since the 2008–09 Global Financial Crisis (see figure 2). 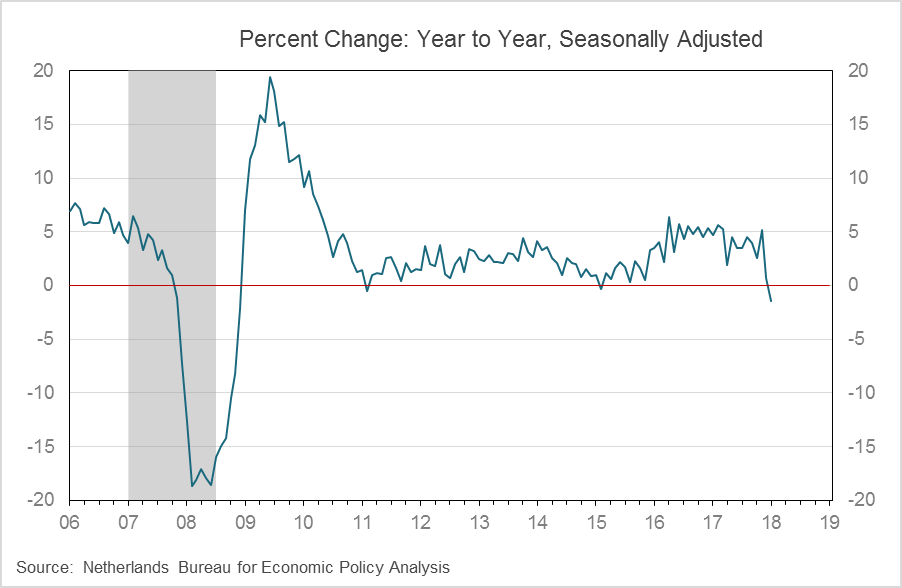 Nor do recent economic data point to a quick reversal. As noted previously, there is uncertainty about the extent to which China’s slowdown is cyclical (and linked to prior monetary tightening and uncertainty over trade) or secular (in which productivity growth has slowed steadily over the past decade as returns on capital have diminished).3  Auto sales have declined steadily since mid-2018, while manufacturing activity as measured by purchasing managers surveys has turned negative. These developments, in turn, have spilled over to economies that are significant exporters to China, including Japan, South Korea and emerging economies in Asia.

The situation in Europe is more precarious. Growth in the fourth quarter came to a standstill, with both Germany and France softening. Meanwhile uncertainties linger over Italy and the U.K., as the deadline for Brexit approaches on 29 March, which could be extended if the EU agrees to the delay voted for in Parliament. With interest rates in the EU close to zero or negative, it is unclear what policymakers can do if the economies weaken further.

Despite the slowdown abroad, the U.S. economy has held up well. While growth slowed to a 2.6 percent annual rate in the fourth quarter from an average of 3.7 percent in the two previous quarters, the outcome was better than expected. Also, strong jobs growth and moderate wage increases should bolster consumer spending, which accounts for nearly 70 percent of aggregate demand. And consumer confidence rebounded in February from a steep decline late last year, as the stock market has recovered and the government shutdown ended.  Accordingly, worries about a possible recession have lessened.

Looking ahead, my view is that economic growth will continue to moderate, eventually reverting to a trend rate of 2.25 percent, which prevailed prior to last year’s tax cuts.

Risk of a ‘Profits Recession’

The main risk for the U.S. stock market lies on the earnings front. In the wake of tax cuts that were enacted at the end of 2017, corporate profits and profit margins surged to highs last year (see figure 3). However, margins are expected to contract this year, as the effect of tax cuts wears off and unit labor costs continue to rise gradually.

Accordingly, Wall Street analysts have been reducing their estimates of 2019 earnings for S&P 500 companies, from more than $40 per share at the end of last year to just under $38 more recently. Consequently, year-over-year profits growth could approach zero by the second quarter, which could give rise to talk about a “profits recession.” Such fears arose in 2015–16, when corporate profits slumped, mainly due to a plunge in oil prices. The difference this time is the slowdown in earnings is expected to be more broadly based. The main uncertainty is whether profits will re-accelerate in the second half of the year, which mainly hinges on how the economy will fare. 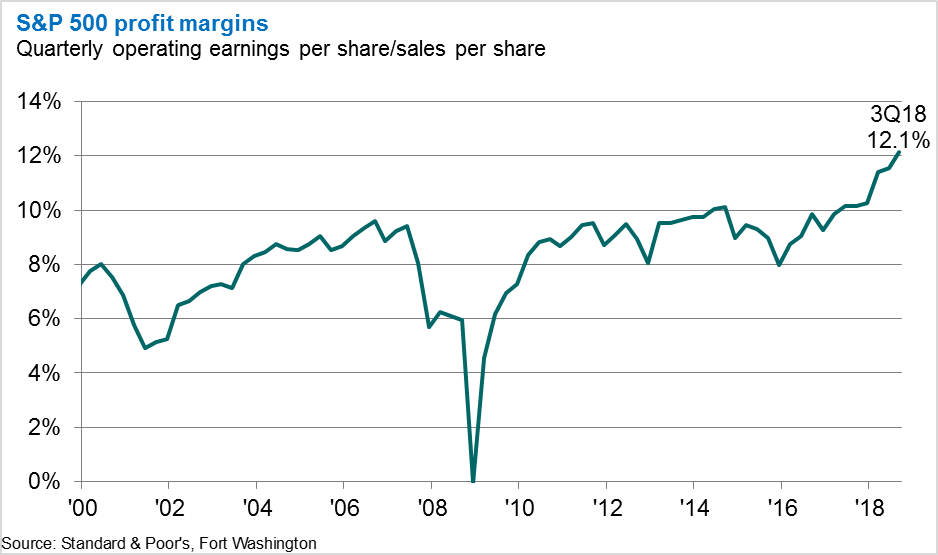 In the wake of the dramatic shift in equity market sentiment over the past two quarters, investors need to assess whether the stock market or the bond market is sending the correct signal on the U.S. and global economies. My view is investors lost confidence in both the Fed and the Trump administration late last year and worried about a possible U.S. recession. While these fears proved to be overblown, the risks of a global slowdown and soft U.S. profit growth are likely to resurface. Accordingly, I do not anticipate the stock market will turn more volatile before too long. That said, as U.S. recession risks have lessened, we do not foresee a bear market this year.

Is COVID-19 Accelerating Automation? Lessons for the Advent of AI ">

Is COVID-19 Accelerating Automation? Lessons for the Advent of AI

Urban and Suburban Patterns of Consumption and Time Use ">

Urban and Suburban Patterns of Consumption and Time Use

The Real Effect of Fiscal Stimulus: Inequality, Interest Rates and Beyond ">

The Real Effect of Fiscal Stimulus: Inequality, Interest Rates and Beyond

Coronavirus and the Economy: 5 Big Questions on the Stunning Collapse and Enormous Response ">

Coronavirus and the Economy: 5 Big Questions on the Stunning Collapse and Enormous Response